As they were heading over the field, they took cover behind some rocks and looked at the land. The land was beautiful. Everything they were promised and dreamed about. It was the perfect place for their tribe to settle down. All of a sudden, one of the lookouts spotted the inhabitants of the land. They became scared because they saw the inhabitants as “giants” and did not feel they had the ability to trust their tribe or the skills to go and win the land. So it was reported to the rest of the tribe, the challenges are too great. All but two of the lookouts were covered in fear. The two courageous ones saw the opportunities ahead and the potential.

Fear and uncertainty usually keeps us from pursing what we know we should do and be who we know we should be. So, how do you see yourself in the story above? I think we see ourselves as the fearful people and as the courageous people. It really depends on the situation.

We all have sat in meetings and have been around people who cannot see past the problem or the issue at hand. When we take this approach to dealing with a problem, we allow the problem to become a giant and appear undefeatable. What are some giants (problems) you might be dealing with at this point in your life? (debt, relational, low attendance, low funds coming in, etc.) Are these really problems? Or can we turn it around to see that most of the situations we face are really challenges that are waiting to be conquered?

The Israelite army only heard the taunts from the Philistine giant, Goliath, and saw his enormous size compared to them. But one teenager, kind of a runt, stepped out and said, “I can defeat him. God will defeat this giant through me.” Imagine what would really be accomplished if we remembered the size, power and sheer awesomeness of our God!

“for God did not give us a spirit of cowardice, but rather a spirit of power and of love and of self-discipline.” (2 Timothy 1:7 NRSV)

We should not allow our perceived “lack” (lack of resources, lack of education, lack of personality, lack of people, etc) because God has and will provide everything we need. “By his divine power the Lord has given us everything we need for life and godliness through the knowledge of the one who called us by his own honor and glory.” (2 Peter 1:3 CEB)

There are many “giants” we face in our lives but we serve and worship a God who is bigger than any giant we may face. Just because we cannot see the outcome does not mean there hasn’t been a victory. The Israelite’s just needed to go in and possess the land because God has given it to them. The battle has been won, even before it started for us.

How will you see things in this upcoming year? As problems? As “giants”? As challenges? As victories we just move into?

We do not need to fear or worry because we have everything we need in Jesus Christ. Sometimes we should simply open our eyes and hearts to see the enormous resources at our disposal before we think about quitting and throwing in the towel.

Challenge: Read and journal about each day about what these scriptures say to you about battling and overcoming  “giants” in your life: 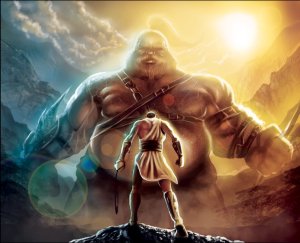